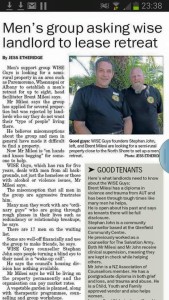 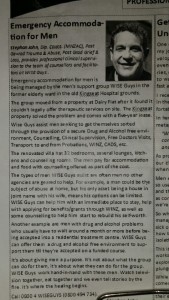 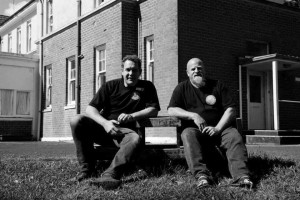 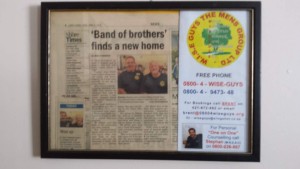 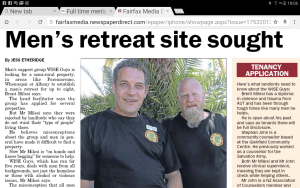 The WISE Guys emergency accommodation houses, are in South Auckland & surrounding areas & is  New Zealand’s only men’s refuge and has worked to keep up with constant referrals since opening in October last year.  “We’re here to offer somewhere for these men to turn to.   It’s either here, homeless or the streets.”

“We’re more of a retreat. We have counseling, we have a strict NO Alcohol and NO Drug policy, we sometimes take the boys out fishing.”

The refuge was started by Mr Milesi and co-founder Stephan John, who opened it with $85 in their bank account.  They now have a group of helpers and four counselors but said all were mostly voluntary.

“Every last cent we get goes back into the centre.” He said the refuge wasn’t receiving government funding and, by any estimation, saved the taxpayer hundreds of thousands of dollars each year by keeping men out of trouble or off the streets.  The other pay off, he said, was seeing men realize they don’t have to go back to their old ways.

I remember the early days of this group. They’ve gone from strength to strength.

Stephan John is a psycho-therapist from memory and a ‘go getter’. He’s pushy and demanding which is a strength when turning an idea into a money making project.

He went from running anger management groups for a church community group to running groups and giving one on one counseling as a private contractor – basically cut out the middle man (church). There’s a lot of individual contractors doing the same but Stephan went further. He listened to the men repeating the words passed into mainstream through online activists/advocates and asked them what they (the men) wanted to do about the issues.

By asking the men what THEY wanted, he locked them into a commitment and turned words into projects. Because helping men is his job, he finds ways to get funding and this project is a beauty. He’s done very, very well to build this men’s refuge – the land and housing is a great score. He has another north of the city which is grand.

About 1000 people are living rough on the North Shore, says Stephan John, a counselor with men’s support group Wise Guys.  Browns Bay Beach is a popular spot for the homeless to take shelter for the night.

People, mostly men, are sleeping in cars, garages and even on the streets, Mr John says.  “It’s a big, big problem and I think most turn a blind eye,” he says.

A community lunch was organized to give the people a nutritious meal and a chance to eat at a table, a privilege not often experienced.

Around 50 turned up for a hot meal at North Shore’s first community lunch. The event was funded by an anonymous donation of $200.

A main meal followed by dessert will be provided at Glenfield’s Salvation Army every Friday. The idea was thought up by people at Wise Guys.  Salvation Army North Shore community ministries’ Dee McColl says some recipients are families who have been evicted from their homes.

“People don’t realize the level of hopelessness in many families is so high they feel nothing can break this cycle,” she says.  Wise Guys helps men who are suffering from depression, isolation, self esteem problems and substance abuse.

Preparing a meal helps them feel like a worthy part of the community, Mr John says.  A resident, who was once a successful chef, is in charge of the kitchen and at the lunches.  Not so long ago he was living out of his car after suffering a nervous breakdown.  Now, the man, who does not want to be named, is helping others rise up from despair by teaching the others how to cook.

“Some of these guys get food parcels but will only eat the baked beans because they don’t know what to do with the rest of it,” Mr John says.  He had a breakdown when his business went under and his mother died so he knows what it is like to be in a desperate situation.

Some Wise Guy members go on to do university courses, take up jobs, join other groups or simply get along better with family members.  “One guy came in and said for the first time in years he was able to look his wife in the eye and that’s an achievement,” Mr John says.

Emergency housing for victims of domestic violence and the homeless is lacking on the North Shore and wider Auckland and mayor Len Brown says the time for debate about the issue is over.

Social workers and volunteers voiced their concerns over a lack of funding and support in place for their services, including trauma and grief counseling for men and women.

Many men are forced to live in cars, garages and on the streets because 90 per cent of protection orders are placed on them, barring them from their homes, Mr John says.  This is despite the men being the victims of a domestic dispute, he adds.

Social services turn a blind eye to male victims which leads to an increase in suicide rates, Mr Milesi claims.

Advocates for housing for homeless individuals told the mayor families are prioritized despite a high number of solo women needing shelter.